Steam in the food industry: applications of steam

Criteria of steam in the food industry

One of the most important components for steam systems in the food industry is an efficient water treatment station. Even pure water such as rainwater still contains a variety of organic and inorganic contaminants, which should not come into contact with food. In a water treatment station, these impurities are removed together with possible iron residues, thus also preventing corrosion of the metal components of the steam system.

In the food industry, most of the products are perishable and have a short life span. Foodstuffs that are to be preserved, such as beer or milk, must be heated. So-called flash pasteurizers are used here. Similar to the medical industry, heating serves to kill all bacteria and microorganisms in the food. These pose a risk to quality and taste and must therefore be completely removed. Bacterial strains used for fermentation, for example, are an exception. In cheese dairies, too, the amount of steam must be adjusted so that the bacterial cultures it contains can initiate milk coagulation.  ​

Steam systems have to perform a great deal in the food industry; in most cases, the individual components must be made of stainless steel to prevent contamination. At the same time, foodstuffs require very different temperatures, and the steam system must be able to adapt flexibly to these requirements.

A second main task is the sterilization of individual components in food production. This includes the filling lines and all associated piping. As soon as beverages are filled, the line itself must be absolutely germ-free to prevent contamination. To avoid long interruptions in the production process, steam sterilization should proceed as quickly as possible.

Steam is often used for foods that need to be heated particularly gently. As a heat transfer medium, steam has a higher heat capacity than water and is therefore particularly suitable. At the same temperature and mass, steam can contain more than six times as much heat as water under identical conditions. 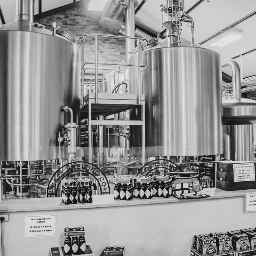 Nowadays, steam is used in brewery distillation plants to bring the mash to boiling point. The mash is a mixture of the grain and yeast fungi required for beer production. The steam used to heat it is in its own closed circuit and does not come into contact with the mash itself. At the same time, breweries consist of numerous components that come into contact with the individual ingredients and the finished beer. Here, special attention must be paid to germ-free surfaces in order to comply with the strict food regulations. Steam is particularly suitable for cleaning and sterilizing entire plants or individual components due to its bacteria-killing effect.

​Example of steam in distilleries

Distillation is a process in which heat is used to separate the vaporizable liquid of a substance from the substances that cannot be vaporized or are difficult to vaporize. The vaporized substances are recovered by condensing the vapor. The process of distillation has existed for thousands of years and was used for a long time to desalinate drinking water. In industry, it is also used to obtain ethanol, which is potable alcohol. The most important alcoholic distillates include whiskey, rum, gin and vodka.

Dairy products must comply with particularly strict regulations to ensure food safety. As a natural product, milk contains a large number of microorganisms. Most of these microorganisms are harmless and perform important functions; however, some may contain pathogens. For this reason, many milk products are heat treated. This also significantly extends the shelf life. One possible process for this is superheating. In this process, the milk is heated to over 100 degrees Celsius for a few seconds by means of steam infusion.

Example of steam in grain mills and feed mills

In grain mills, grain is processed using various technological treatments to improve its nutritional value. Heat is often used, especially for pelleting, extruding, and expanding the grain. Both wet and dry heat can be used, and steam is used for wet heat applications. The starch contained in the grain becomes sticky when processed with wet heat; this is particularly relevant in the production of animal feed in order to increase the digestibility of the grain and at the same time enable the supply of proteins.

Example of steam in chocolate production

Steam plays an important role in chocolate production. Since cocoa beans are a natural product, they contain numerous microorganisms and bacteria; some of which are harmful to humans. Therefore, in many factories, the cocoa beans are treated with steam before further processing; this ensures that the bacteria are rendered harmless. Subsequent roasting of the beans also removes bacteria, and some plants find this sufficient. In the case of particularly high demands or complex production processes, however, it may be necessary to have a raw material available that is particularly low in bacteria. This is the case, for example, if other substances rich in bacteria, such as milk, are used in the chocolate. The steam demonstrably reduces the amount of surviving bacteria. Many plants therefore use steam as an additional method of removing bacteria.

Example of steam in bakeries

Steam is also used in bakeries. In steam ovens, food is not only baked, but also humidified at regular intervals. The higher humidity in the oven affects the texture of the surface of the dough. The steam causes the starch in the surface of the dough to coagulate. This prevents bread and other baked goods from drying out, which would have a negative effect on taste and consistency. Aesthetically, steam has a positive effect in bakeries: the baked goods become more voluminous under the effect of steam and acquire a nice sheen. ​

Even with raw meat, it is important that surfaces and objects are free of bacteria during both processing and packaging. A distinction can be made between steam processes for cleaning the production facilities and processes for de-bacterializing the meat. The vacuum steam extraction process, for example, removes all impurities prior to actual further processing. The subsequent processing steps, such as smoking and drying the meat, can thus be carried out without any loss of time.

Convenience food is becoming increasingly popular in Europe. The ready-to-eat dishes often only need to be heated and often represent an inexpensive alternative for many households. In this area, steam plays a special role in terms of increasing the shelf life of these dishes. Many of the dishes are precooked with the help of superheated steam. Vegetables such as peas are treated with hot steam before being frozen and then quenched with cold water. This ensures that the nutrients and color intensity of the vegetables are preserved.